IHE as an international profiling organisation defines interoperability specifications called “IHE Profiles” that answer the needs of clinicians collected in Use Cases. IHE Profiles constitute the building blocks of the interoperability framework that applies to the healthcare project. IHE Profiles can be extended considering local laws, rules and other specificities identified by the project at the local level. Extensions to IHE Profiles emerge with the need to verify the correct implementation of these new constraints within products, sometimes with formal recognition.

Products implementing IHE Profiles are tested at (annual) Connectathons, participants execute peer testing, following test plans developed by IHE, resolve their issues and gain confidence in their implementation. With the experience gained during the Connectathons, it is appropriate to apply the same process to verify the conformance of products to project specifications. These specific test sessions, narrowed to a subset of IHE Profiles and designed to fit a particular context, are known as Projectathons. Beyond the need of testing products, Projectathons give the opportunity to meet and educate local professionals involved in the project (software editors, eHealth experts, and users). A secondary objective is to quickly gather feedback on the project specifications to accelerate their development and adoption. More than one Projectathon may be necessary to meet the project objectives. The scope of each testing iteration is tailored to the project’s maturity at that specific time. At the early stages of interoperability specification development, the Projectathon aims to communicate about the project, IHE Profiles, and the underlying standards. After further iteration, the specifications gain more maturity that allows testing of more and more requirements. 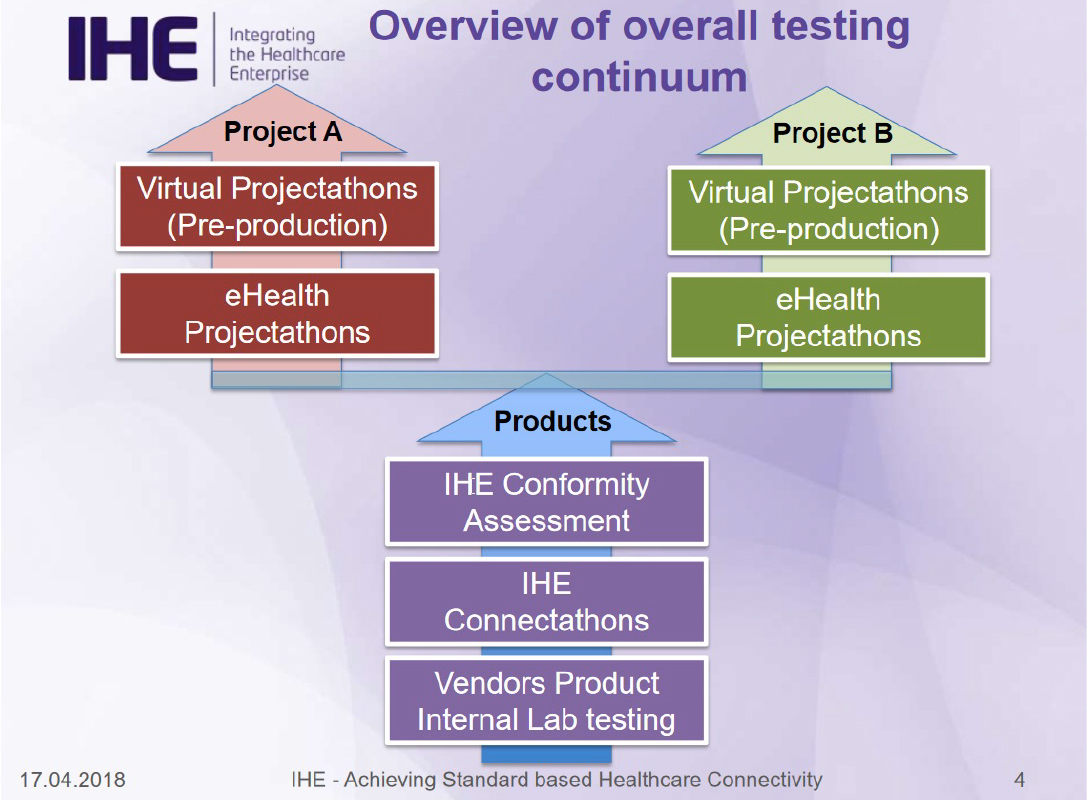 How to organise a Projectathon

The scope of the Projectathon is determined by the project need and scope for interoperability. The first step is to identify or even develop the interoperability specifications to be tested. The Use Case driven methodology developed by IHE-Europe is beneficial to produce relevant interoperability frameworks. Software editors and eHealth experts should be involved from the early stage of the process to contribute to training sessions on the underlying IHE Profiles and appropriate standards and give early feedback.

Once the first draft of the interoperability specification is released, a first Projectathon can be set up. The scope must be narrowed and the objectives achievable. The main objective must be to gather the local professionals and ensure that they adhere to the project. Setting up a three-day testing event is a good start at this stage. To do that:

An important place is given to the education of local users and eHealth experts. The best way to involve them is to train them to verify the tests during the event, acting as Monitors. This is one of the principal benefits of a Projectathon

In December 2010, the first ever Projectathon was organised in Slovakia to demonstrate the feasibility of the European project called epSOS (European Patient Smart Open Service). Since then, the number of Projectathons has dramatically increased to reach no less than 11 test events over the last twelve months - four organised for the eHDSI (eHealth Digital Service Infrastructure) project, two in Ireland, two in Switzerland (EPR – Electronic Patient Record), and one in France (ANS – Agence du Numérique en Santé), Gabon and more recently in Greece.

Projectathons are not only useful in the healthcare domain. In 2018, in parallel to the IHE-Europe Connectathon in Den Haag, the first Projectathon was organised for the IES (Integrated the Energy System). The IES research project “develops a modular process chain to ensure the interoperability of data exchanges in smart grids and smart energy systems”. A second testing event was held the year after in Vienna.

The interoperability of healthcare information systems is one of the most important challenges facing both users and suppliers of healthcare solutions. Read more